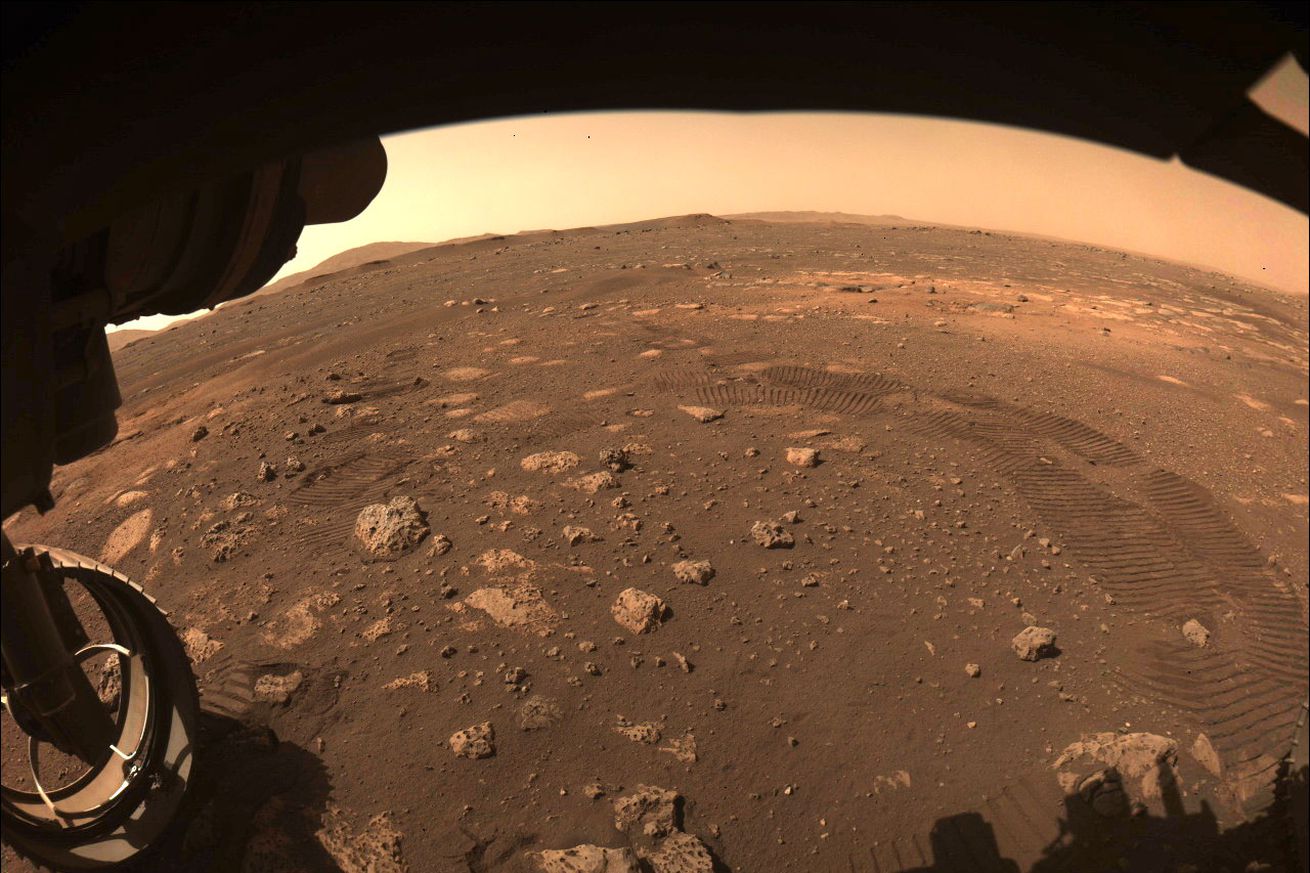 Perseverance, the car-sized rover NASA landed on Mars last month, has taken its first spin on the rocky surface of Jezero Crater, NASA announced today. The rover’s six wheels drove about 21 feet to carry out a key mobility test on Thursday, as engineers back on Earth prepare to execute the mission’s core science objectives.

The rover’s six aluminum wheels left tracks on the Martian dirt — as captured by one of its on-board cameras — after driving straight for 13 feet, then turning around to back up 8 feet. Anais Zarifian, Perseverance’s mobility testbed engineer, told reporters it went “incredibly well” and performed better than it did during pre-launch tests on Earth.

“I don’t think I’ve ever been happier to see wheel tracks — and I’ve seen a lot of them,” she says. “This is just a huge milestone for the mission and the mobility team. We’ve driven on Earth, but driving on Mars is really the ultimate goal.”

Though short and slow, the drive demonstration gave engineers refreshing confidence that NASA’s $2.4 billion rover is ready to travel some 656 feet over the next two years to analyze rocks and scoop up coveted Martian soil samples for a future return mission. “This was just so amazing to see last night. We’re really happy about this,” says Robert Hogg, Perseverance deputy mission manager.

Like its sister rover Curiosity, Perseverance’s top speed is 0.1 miles per hour, “so not very fast,” Zarifian says. It uses a “bogie” suspension system that can climb over rocks as big as its own wheels, about 20 inches in diameter, while keeping its main body level.

But landing a wheeled robot on Mars isn’t about speed. With an improved computer for avoiding obstacles and sand pits, “we’ll have less time planning drives and down time, and more time to do science,” Zarifian says.

Since landing on February 18th, Perseverance has beamed back thousands of images from most of its 19 on-board cameras, including a frame released Friday showing Jezero’s Delta, a target site for the rover to drive toward in the near future. Scientists say the elevated landform, seen surrounded by an obstacle course of rocks and sand pits, is a junction between an ancient dried-out river and the lake that Jezero used to be 3.5 billion years ago.

Mission teams at NASA’s Jet Propulsion Laboratory in California are mulling different paths for Perseverance’s trek to the delta, aiming to settle on one in the coming weeks that is “most efficient, safest, and most scientifically interesting,” says Katie Stack Morgan, the mission’s deputy project scientist.

NASA released Perseverance’s first high-resolution panorama this week captured by the rover’s Mastcam-Z camera. The mosaic’s 79 images were taken on the Martian afternoon of February 22nd, and one YouTube user edited it into a 4K video that slowly pans across Jezero’s horizon.

The rocks appearing in Perseverance’s new images “were likely deposited by rivers flowing into the ancient lake Jezero,” Morgan says, adding that scientists are working to understand the rock’s origin.

Perseverance launched from Florida last summer for a seven-month trek to the Red Planet, exploiting a two-month window of time when Earth and Mars align closely in their orbits around the Sun once every two years. 293 million miles later, it survived a blazing fast, seven-minute plunge through the Martian atmosphere last month and carried out an extremely complex landing at Jezero Crater, a dried up lake bed that scientists hope could hold signs of microbial life fossilized from billions of years ago.

The rover’s mission team memorialized the rover’s landing site at Jezero by naming it after Octavia E. Butler, the late science fiction author and the first Black woman to win a Hugo Award and Nebula Award.